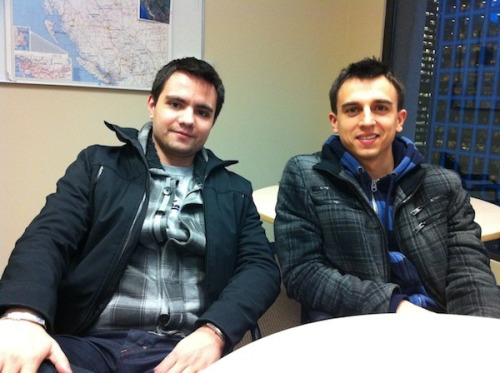 Over two years ago, Mircea Pasoi and Cristian Strat (pictured above) wanted to come to Canada to start a company. They had great endorsements, previous accomplishments and credible investors lined up to give them money via the Bootup Labs accelerator program but Canada did not know what to do with these entrepreneurial immigrants. Getting here was easy but keeping these two in Canada while they built Summify was the impetus that inspired Danny Robinson to kickstart the Startup Visa Canada initiative.

Recently, we caught up with Danny to get the backstory on how he discovered these talented Romanian wunderkinds and what he went through to help them start Summify in Canada.

SUV: How did you discover these Romanian gems?

Danny: In the fall of 2009, Bootup Labs (BL) used social media to put out a call for applications for its Winter cohort. Boris Mann and I were focused on finding the most talented entrepreneurs in the world and we used all of our social media channels and networks to get the word out. We were completely agnostic when it came to geography. Luckily, Mircea and Cristian heard about BL, applied to the program under the name ReadFu and were included in the shortlist Boris & I created.

Boris conducted all of the initial interviews via Skype. He loved the Summify team. They were two time Google interns, had won programming competitions in Romania and had a completely humble and willing to learn attitude. They had all the elements of what makes great entrepreneurs – a perfect storm, really. I wasn’t crazy about their initial idea but Boris and I always said “we back the people, not the idea.” So, we accepted them into the program.

But that was just the beginning, right? Can you share the Cole’s Notes version of the long process you went through to help these entrepreneurs build their startup in Canada?

Right! Accepting them was the easy part. We knew that the immigration process would not be easy but we didn’t expect it to be as challenging as it was. So, we told them “we don’t know how the Visa situation will work out, but just get yourself here and we will figure it out.”

What surprised you about the process?

In the short time they were here, Mircea and Cristian created 5 jobs and attracted significant foreign investment into Canada from top tier Valley VCs. It surprised me that they could NOT work for their own company, which was sufficiently funded and had money to pay them salaries. They were not a burden to Canadian society. However, their situation did not fit nicely into the current system, which requires that they be employed by an established company. I understand why it is set up this way and believe that is the right course of action for most immigration situations but Summify had credible investors, who were investing their money in the company. The investors, were essentially acting as “sponsors” to some extent. This is why we need to reassess the current system and come up with an alternate visa and process that specifically addresses technological entrepreneurial immigrant situations.

Recently, Cristian and Mircea sold Summify to Twitter and moved South. Is this good for Vancouver?

Do I wish that they stayed and built a biliion dollar company in Canada? Yes, and I hope they come back someday. But people have to understand that only a small % of companies created grow to become biillion dollar companies. In order to get those big anchor companies in Canada, we need to start more smaller companies. We can dramatically increase the number of companies started by enabling talented entrepreneurs like Cristian and Mircea to come to Canada to start their tech business.

Even though Summify was acquired by Twitter and moved South, the benefits to Vancouver are significant. Investors in Vancouver made money! Many were able to build up their profiles and bolster track record, which they can use to invest in more companies here and attract additional foreign investment to their funds. On top of that, Vancouver now has a higher profile in the global technology community and that will help attract more entrepreneurs to Canada. Specifically, the Romanian technology community thinks that Vancouver is a great landing pad and place to set up shop. Our hope is other international entrepreneurs will take note and consider Canada as a great place to start a company.

Why do you care about Startup Visa Canada now?

This was not an easy process. I felt Mircea and Cristian’s pain and realized we needed a better system in place to attract talent and encourage innovation in the immediate future. At the same time, I saw entrepreneurs in the US pushing for similar legislation. I knew that when the US opened their borders (which is inevitable), we would lose some of our best and brightest to our neighbors down South and would need to become more globally competitive to backfill that drain.

I care because I am an entrepreneur and Vancouver is my home. I don’t want to see Canada left behind when the rest of the world figure’s this out. At BL, we were agnostic of borders and as a result, we were able to find and attract Cristian and Mircea to Vancouver. Canada has an opportunity to lead this entrepreneur’s arms race. We are nimble. We can implement legislation faster than other countries, like the US, but we need to act now.